The Streets are No Place for a Cat: Your Comments 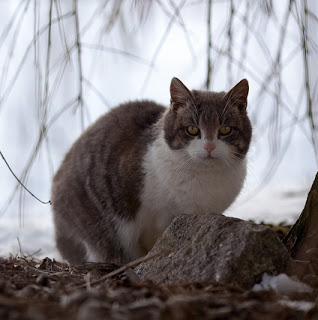 There were a lot of comments on Facebook about my last blog, and a handful of people took the time to write me with their thoughts and ideas.

The majority, about 85 per cent, agreed that cats should be kept inside, or at least safely under their owner’s control in a harness or structure at all times — an option I should have added.

I also should have mentioned coyotes, an increasing threat to outdoor cats. The local coyote numbers appear to be growing. I have seen two myself behind the West Hunt Club shelter. Coyotes can catch and will kill cats and small dogs. Some U.S. communities with large numbers of coyotes simply have no outdoor cats, as any cat venturing outside is killed in short order.

Several added a concern about the effect of roaming cats on songbird populations, a point I didn’t make and should have. Most studies point to outdoor cats as the number one cause of the death of millions of birds and small mammals annually. Some species are threatened as a result.

Those that disagreed, disagreed vehemently. T.C. wrote in part:

“…I think it’s terrible that people don’t let their cats outside, if the cat wants to go outside, and you live in a location that isn’t “busy”, you should totally let your cat out.. ..Animals want to frolic!! Our children may live longer if we keep them in the house and never let them out either! Think about it, they could get hit by a car, or kidnapped, or freeze.. ..Stop living in fear and let the animals be animals! S— CAN happen, that doesn’t mean it will!! Let them enjoy their unfortunately short lives whichever way they want!”

Many that agreed that cats should be kept inside expressed their personal frustration about the issue. L.L. wrote in part:

“We  have a neighbor who allows his cats out all the time.  One of which constantly comes and urinates on my basement window – which has a screen and happens to be right over my desk.  I can’t open that window any longer because of that, and my best efforts don’t keep this cat away.  To be honest, it’s disgusting and I’m at my wits end about it.  I wouldn’t let my own dog do this.. ..They tell me they are ‘outside cats’ and they just can’t keep them indoors.. .. An entire neighborhood shouldn’t have to ‘adopt’ a cat just because one family chooses to have one they let run loose”

Many writers expressed tremendous concern about the cats they see in their neighbourhoods. J.A. wrote:

“Cats do not belong on the streets yet a lot of people think it’s ok to have an ‘outdoor’ cat or in-outdoor cat.  I see kitties in our neighbourhood regularly. I’ve even emailed the OHS on one little guy that we kept on seeing throughout the winter, we know he belongs to someone as he is collared and we were concerned for his safety. It breaks my heart every time I see a putty outside. Especially in the winter time…”

Some shared their reasoning for keeping their cat inside. V.S. wrote:

“A quick walk through my neighbourhood, wallpapered in posters for missing cats, was enough for us to decide to keep our girl inside. Sure she stares out the window longingly sometimes but it is my responsibility to keep her safe. She is fixed and vaccinated should she escape though. Humans need to do better”

Some shared their journey to keeping their cats indoors.  P.W. wrote:

“In the past we have owned 2 cats and both were inside and outside cats. Unfortunately both were killed on the road. It was very traumatic for our family and when my 20 year old son stated to talk me into another cat (he missed having a pet in the house)..  .. We talked as a family and agreed to adopt a cat. I only agreed to this if we kept the cat indoors.”

Thank you to everyone who shared thoughts and ideas. The goal of the blog was to stimulate discussion and, I hope, change.

With the greatest respect to those who feel cats should roam, for me this debate was over long ago. After 16 years at the Ottawa Humane Society, I simply cannot accept that cats are better off outside. Every one of those years, 3,000 to 5,000 lost cats have needed our care. Many of them were injured or sick and in pain. Many suffered frostbite, needed amputations of tails and legs. Some were intentionally harmed. All of them needed a safe refuge.

And the reality is, most wouldn’t have been here if they hadn’t been allowed outside.