(Some) Good News for (Some) Whales in Ontario 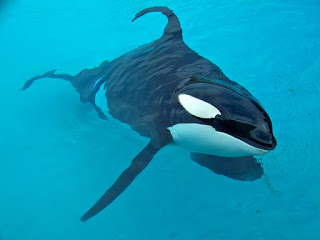 In the wake of accusations of inadequate care by former employees and a government investigation of Marineland in Niagara Falls, on May 28, 2015, the Ontario legislature passed the Ontario SPCA Act, to prohibit the acquisition or breeding of Orcas (“Killer” whales) in Ontario. The amendments also bring some degree of oversight to the much-criticized facility.
All of us who care about animals are celebrating—a bit. Orcas should not be in captivity. They  are highly social; some populations are composed of matrilineal family groups which are the most stable of any animal species.
There is a catch: there is only one Orca in Ontario—Kiska, Marineland’s resident Orca. And she lives alone, in isolation and has no opportunity to socialize and interact with members of her own species.
There is another catch: while Kiska is the only Orca in Ontario, she is not the only cetacean (whale) in Ontario, or even in captivity at Marineland. The facility also houses beluga whales—several dozen, in fact.
Some people have told me that Marineland and its sister facilities help marine mammals by educating children and adults about the animals. I don’t buy it. In the end, it is about cold hard cash. The acclaimed movie Blackfish did more to increase understanding and awareness of the species than 54 years of Marineland. You can vote with your dollars and not visit Marineland or any place like it.
Bruce Roney
Executive Director