Quebec and Pit Bulls: Another Province Looking for a Quick Fix that Doesn’t Work 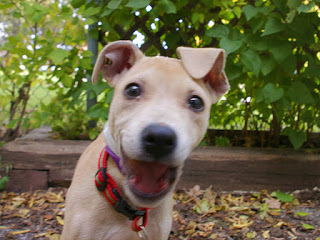 The OHS could not rehome Alice, the pit bull terrier pictured above, because of Ontario legislation, but could transport her to Quebec. This will end if Bill 128 passes.

Quebec has proposed new legislation to ban certain dog breeds. The focus of course, is pit bull terriers, as it was in Ontario more than a decade ago. In some ways, the Quebec legislation — Bill 128 — is even scarier, as it leaves the breeds to be banned open for future addition. That is, this or future governments will be able to add other breeds to the list much more easily: by regulation, not by legislation. Already, the Quebec government has identified Rottweilers as another breed they will target.

So, why should you care?

You should care because breed bans don’t work. I was unable to obtain statistics for Ottawa, but the City of Toronto reports that the number of dog bites are up since the much ballyhooed legislation was introduced in 2005. Yep, you read that right: up, not down. In fact, a Global News report in February 2016, found that Toronto’s reported dog bites have been rising since 2012, and in 2013 and 2014 reached their highest levels this century, even as pit bulls and similar dogs neared local extinction.

It’s better to be a pit bull terrier in Ottawa, but only for now. The City of Ottawa has taken the approach that the legislation should be used to address individual situations and have, as yet, not enforced the global ban. The Ottawa Humane Society has refused to participate in mass euthanasia of a breed. We address dogs as individuals, not simply as breeds. Since pit bulls cannot be legally adopted in Ontario, we rely on out-of-province transfers, many to Quebec. If this legislation passes, the OHS and other humane societies in Ontario will have fewer options for rehoming safe pit bulls.

So what does work?

Many jurisdictions have researched good solutions to the real problem of dog bites and have concluded that legislation to prevent dog bites and to manage aggressive dogs should focus on the individual dog and the owner not the breed.

In 2012 the Australian Veterinary Association (AVA) commissioned a report into the causes behind aggressive dogs. The report found that there was little evidence to support banning particular dog breeds as a way of addressing canine aggression in the community. Instead, education of the public and legislative tools that equip animal management authorities to identify potentially dangerous individual dogs offer the best results in reducing incidents with aggressive dogs.

The report found that any dog of any size, breed or mix of breeds has the potential to be aggressive and to be declared dangerous so dogs should not be declared dangerous on the basis of breed or appearance. Each individual dog should be assessed based on its behaviour. It added that the role of the dog owner is a critical factor.

Genetic predispositions are an important factor in animal behaviour, however the impact of the environment and learning are also critical. The tendency of a dog to bite is dependent on at least five interacting factors:

What can you do?

You can write the Minister of Public Safety, Martin Coiteux, especially if you are a Quebec resident. Tell him that breed bans don’t work, and that animals will lose their lives needlessly under his legislation. Tell him that you are concerned about human safety, but that there is a better way.
The minister can be contacted at: