Hazel: A Reminder and a Symbol 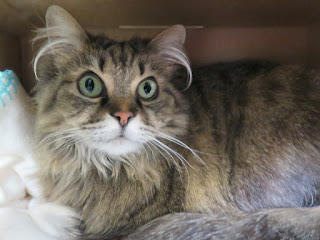 This is Hazel. She is a seven-year-old long-haired domestic tabby. Other than being a very beautiful cat, there is not so much special about her. Except this: she is the 200,000th animal in our computerized database.

So what does that mean? She is obviously not the 200,000th animal to come into our care. Our database only goes back to 2002. The Ottawa Humane Society has surely cared for many more hundreds of thousands of animals since our founding in 1888.

For me, Hazel is a reminder and a symbol.

She is reminder of just how many animals need the OHS every single year. The great news is the numbers are slowly dropping. But there are still close to 10,000 animals who have nowhere else to go that still rely on us every year. And caring for that many animals remains a tremendous effort on our part and on the community that supports us.

She is a symbol of how far the OHS has come in helping Ottawa’s animals. Hazel was admitted to the OHS as stray at 6 p.m. on the March 28. She was returned to her owner shortly after noon on the 30th — just 36 hours later. This isn’t typical. Most years only six per cent of cats are reunited with their families. But Hazel’s family saw her on the OHS website and called. Her family also decided to have her microchipped before she left, so she will have permanent identification should she ever get lost again. Technology is helping us reunite animals with their families.

Had Hazel not been returned to her family, she would have received excellent care and almost assuredly, a new forever home, having received all the loving care she might need to get there. This was once simply not possible for so many animals. The first animal in our database may not have been so lucky to receive the care that Hazel did. Hazel is a symbol of what we can do for animals with a little ingenuity, a lot of work and the support of our community.