Disasters and Their Lessons 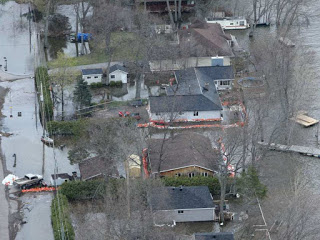 OHS was at the ready to take any animals displaced by the recent flooding. Julie Oliver/Postmedia

Disaster relief has been on my mind a lot lately, mainly because of the tragic sight of homes under water from recent flooding and our preparation at the OHS to help the animals made temporarily homeless as a result. Coincidentally, May 14 was National Animal Disaster Preparedness Day, and our partner, Hills Science Diet, has been reminding us to share information with you about preparing for a disaster with your pet.

All this has brought to mind a dinner with my good friend Kate, who had been in charge of one of the temporary animal housing facilities set up in Louisiana following hurricane Katrina. I learned a lot from her that night about what to do and what not to do in a disaster, particularly when it comes to animals. I even learned a new acronym: S.U.V.  SUVs, as I came to know, are often the biggest logistical nightmare for those leading disaster relief. SUV stands for Spontaneous Unsolicited Volunteers. While clearly responding with the best intentions, those who showed up on site to help were the biggest single problem she faced. So much so, she had to plead for weeks with anyone in authority for fencing; not to keep dogs in, but to keep would-be volunteers out.

Another big problem was donations. Yes, donations. As the SUVs started streaming in, so did truckloads of donated stuff. Most of the stuff wasn’t what was needed. But even un-needed stuff needs to be gone through, organized, and stored in some form. There was no capacity to dispose of anything and stuff was coming in daily — literally by the ton.

It was a long and fascinating evening with Kate. She shared so many stories about Katrina, its aftermath and her role in helping. I am grateful that I learned a lot that night about being a part of the solution, rather than contributing to the problem. The two most important lessons were these: offer and stand ready to go, but don’t go until asked, and donate cash not stuff, unless you are asked for stuff.