Look What You Did!

Over the year we’ve shared heart-wrenching stories about a few of the animals that needed your special care. As the year draws to a close, we want to tell you about what has happened to these cuties because of your kindness!

Templeton was brought to the OHS in July when a bylaw officer found the one-month-old kitten caught in rat trap and on the brink of death after eating rat poison. Thanks to you, the OHS was able to save Templeton’s life. He spent time recovering in a foster home and was adopted at the end of August.

Two-month-old Angel came to the OHS in August in excruciating pain with two broken legs. Following a successful surgery to repair his legs and some time recovering in foster care, Angel found his new family in September.

Three-month-old Eponine arrived at the OHS after being found in terrible pain in September. The skin on her jaw had been ripped off and she couldn’t use her front right leg. Unfortunately her injured leg did not show any improvement and needed to be amputated. After quickly recovering from surgery, she was adopted in October. 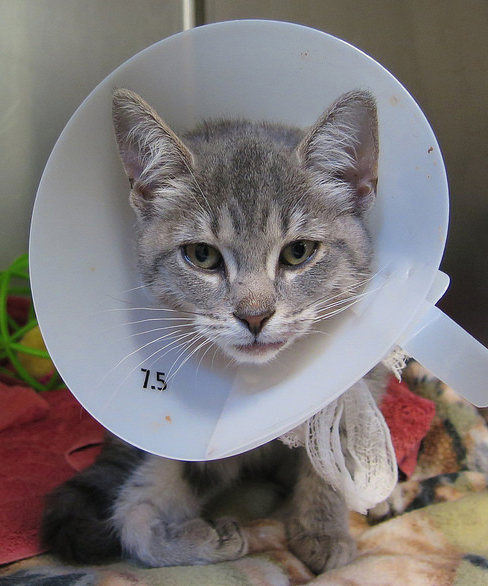 Harvey, a seven-month-old German shepherd mix, arrived at the OHS just before Thanksgiving. He had been hit by a car and was in terrible in pain. He had surgery to fix his leg and spent a month recovering the in care of an OHS foster volunteer. Harvey found his forever home just before Christmas.

Two-year-old Prince Harry arrived at the OHS in critical condition. He was in agonizing pain after the skin on his tail had been ripped off. Part of his tail was amputated in October. Prince Harry, now known as Pumpkin, is in the Adoption Centre ready to find his purr-fect match.

Sadie Mae arrived with horrific gunshot wounds to her face in November. This sweet eight-year-old girl underwent surgery to remove her left eye, repair her left ear and reconstruct the left side of her face. After her surgery, Sadie spent a month receiving intensive care the critical care unit is now recovering in a foster home. Soon she’ll be spayed, have dental work done and be off to the Adoption Centre to find her happily ever after.

All these animals owe you a special thanks for their lives and their second chance. Since they cannot speak for themselves, we want to do it for them. To all of you that were touched by these stories and stepped up to help Templeton, Angel, Eponine, Harvey, Prince Harry, Sadie Mae and the close to 10,000 others that need you every year, thank you.