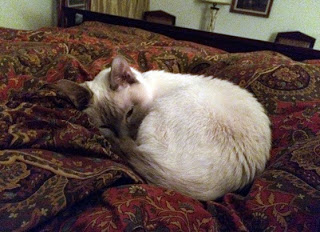 I have fallen in love. She is beautiful. Her name is Gracie. She has been living with me for a little less than a month.
She is a tiny, 10-year-old blue-point Siamese cat. I think that Gracie is the most lovely, sweet cat ever born. Of course, I am biased.
Gracie — who came to us as Misty — had a long journey into our home. She and her sister were surrendered to the OHS by their owner on Jan. 17 of this year. Both cats had severe dental problems and both were suspected to have undersized kidneys.
Neither sister took well to kenneling and were showing signs of stress. Stress in cats in a shelter can literally be a killer. They weren’t eating and were losing hair at an alarming rate. Staff members took the sisters into their offices to give them a break from the shelter. That is where I met Gracie. She took to me right away.
Gracie still had a long way to go. She refused to eat and was given drugs to stimulate her appetite. Eventually she was force-fed. She developed severe diarrhea and was treated with three different medications before one worked. She had three rounds of dental work: a cleaning and two courses of extractions. She was fostered between each. Between the two extraction sessions, she developed an upper respiratory infection and was treated for that.
We had been considering a cat for some time, but my allergy to them was more than a small hurdle. But amazingly, I didn’t react to this little cat. So, I submitted a request for adoption and hoped that no one else was on the request list for a senior cat like Gracie. We were sad to find out that Gracie’s sister succumbed to kidney failure while in foster; likely an underlying condition worsened by her refusal to eat. We were worried for Gracie, as she too appeared to have undersized kidneys.
Gracie pulled through it all, and on March 26, she came to our home for the first time. She still wasn’t ours though. She was a Foster Me First adoption as she was still recovering from dental surgery and was on antibiotics and pain medication. It wasn’t until after her final exam in April that she became ours.
Gracie’s long story is no longer that  exceptional. While still a huge challenge, once the OHS could not have helped a cat with such a long list of needs. The OHS would not have had the money or the staff resources. Cramped conditions at the Champagne shelter would had virtually guaranteed that she would have become much sicker.
So I am grateful; grateful to all the staff and volunteers that cared for Gracie on her journey. I am grateful to the many generous donors that helped us built the West Hunt Club shelter, and to the thousands of donors that give us the resources to care for her and so many like Gracie today. Thank you for giving us Gracie and for giving so many animals a second chance.
Bruce Roney
Executive Director