Heck no I won’t go. REPRISE

At the moment, I am in Newfoundland, once again seeing whales in the wild, where they belong. It seemed a good opportunity to share my piece from last year about the whales that aren’t so fortunate. 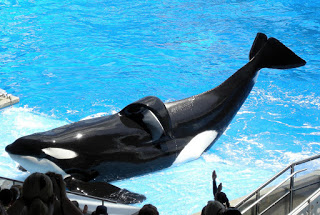 About a decade ago, I was fortunate enough to participate in whale watch in Massachusetts.  Seeing humpback whales in the open ocean was one of the most thrilling experiences of my life.  Of course, whale watches in those waters are tightly regulated. Boats can only come so close, motors need to be turned off, etc.  I was satisfied that my thrilling experience wasn’t at the expense of the welfare of these majestic creatures; not so for marine mammals in captivity.

I understand that people want to see animals close-up. They want their children to see them. But at what cost to the animals? Marineland, right here in Ontario, has made itself as famous for its poor treatment of animals as for its jingle.

The whales are housed in cement aquariums very different from their natural habitat. In the wild, orcas, live in pods of two to 50 whales and they swim up to 100 miles in a day and dive to depths of 500 feet. Some orcas stay with their families for life, as they travel in pods and sometimes join other pods for hunting or socializing. They prefer deep water and usually spend only 10 to 20 per cent of their time at the surface.

In captivity, the killer whale is extremely limited. Kept in tanks not much larger them themselves, they are unable to swim even the tiniest fraction of the lengths and depths they do in the wild. In an aquarium they will spend up to 50 per cent of their time at the surface, which is likely the reason they sometimes suffer from dorsal fin collapse, a result of gravity pulling on the fin when it does not have the support of the water.

Like orcas, belugas travel hundreds of miles in the wild. Constrained in an aquarium, these whales end up swimming in circles with little stimulation, suffering psychologically, mentally and physical. There is a high mortality rate for whales captured from the wild and those born in captivity.

Despite the owner’s much touted and bogus “educational” aspect of Marineland, it is a business. It is owned by a man named John Holer and it exists to make money. Animals are kept at the lowest possible cost in order that Mr. Holer can make the highest-possible profit.

And if we don’t go, it will become a relic of the past.