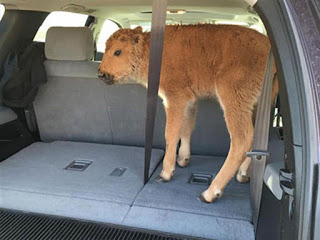 The story of two Canadian tourists visiting Yellowstone National Park and “saving” a young bison calf by putting it in the back of their SUV and taking it to a ranger station has gone viral. I hope it becomes a lesson for everyone.

Most of us would feel sick if they killed a healthy young animal by mistake. Here is the thing, people do it all the time. Every spring, all over North America, people pick up juvenile wildlife that don’t need their help. They bring them to a humane society or other authority whose only option is to euthanize the poor creature.

That is what happened to the bison. On May 16, Yellowstone National Park officials announced a baby bison had to be euthanized after a pair of Canadian tourists put the animal in their car. The two feared it was cold, despite warmer-than-average temperatures.

“The bison calf was later euthanized because it was abandoned and causing a dangerous situation by continually approaching people and cars along the roadway,” park officials said in a press release.
Officials tried numerous times to re-integrate the young bison back into the herd, but it was rejected.”
The story of the baby bison spread fast on social media, prompting people to demand to know why the young bison hadn’t been sent to a rehabilitation centre.

Officials responded on the park’s Facebook page: “In order to ship the calf out of the park, it would have had to go through months of quarantine to be monitored for brucellosis. No approved quarantine facilities exist at this time, and we don’t have the capacity to care for a calf that’s too young to forage on its own.”

In the scale of the natural world, I know this is a very small event. And I know the tourists were concerned and meant no harm. But they did harm and this little tragedy could have been avoided, along with the dozens of little tragedies that well-meaning people in Ottawa will present the Ottawa Humane Society with this spring.

You can help. Spread the word. Unless you know for sure that juvenile wildlife  needs help, such as if you can confirm the death of the mother, take our advice: if you care, leave them there.