You Made National Cupcake Day the Sweetest Day of the Year 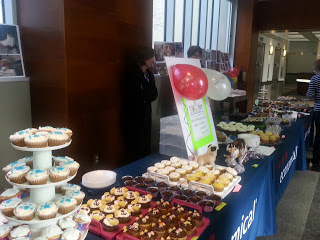 On Feb. 27, National Cupcake Day marked the sweetest day of the year for the animals at OHS. Thanks to all the teams and individuals who baked, sold and purchased cupcakes, we have raised nearly $18 thousand to date for the animals.

In the weeks leading up to the big day, we had a chance to get to know two teams that were passionate about helping Ottawa’s animals:

Economical Insurance Ottawa developed a committee to support this year’s National Cupcake Day. The company stepped up to support the animals by offering to match all donations up to $1,000. They were very active over the last month with raffles, a cutest pet competition, 50/50 draws and so much more. Thanks to their efforts, they raised $1,300 for our furry friends. Their reason to give back: many had adopted pets from the OHS and know how much their support mattered to the animals still looking for forever homes.

The next group was a combination of a few teams making up Dylan’s Dream Team. Dylan’s Dream Team was developed in support of the Dylan Fund to recognize a wonderful 14-year-old boy who passed away in November 2016. Dylan cared very deeply about the environment and the well-being of all animals. In his memory, friends, family and community members who knew Dylan raised funds for the benefit of animals at the OHS. Between family, friends and loved ones, these dedicated supporters raised more than $3,000 for the animals!

Thanks to everyone who participated in National Cupcake Day! Your generous support has helped change animal lives.